My visit to Sony UK

Found the place OK. Fairly stylish, but somewhat understated building, “Sony” written clearly and high up which was good for identifying the building. (It was in an industrial park, I didn’t see any other companies names)

The building is a cylinder, with arms coming off each side. Pleasant to look at, inviting, like walking into a big hug

Staff friendly. We were a small gathering, perhaps 30 or so people in total. I was greeted in a friendly & efficient manner. They’d lain down a lovely carpet flooring with bright primary colours, each colour making a path to go to a particular section, that made the visit feel a bit more fun

We stood around chatting; I was pleased to recognise Envisager, who originally retweeted Lord_Ross’s tweet, linking to the Playstation forums, offering the visit. I was the 6th person to answer; there was only space for 5 people! But somebody else couldn’t attend, so I got my visit Envisager was lovely & polite, & he made himself available via phone in case any of us needed it, though I use Twitter more readily & that worked out just fine also as well as email.

I somehow expected a somewhat Willy Wonkaish experience & there was huge disappointment at no perspective playing corridor, no lickable wallpaper… & they didn’t even make any pretence at being able to send Mike TV through onto a TV!!!, though a lovely man demonstrating the 9inch Sony Tablet to me did chuckle when I mentioned that consumers/customers would like chocolate to be transmitted by TV

It was great to see the products in an environment where one could get to have a good hands on experience with people who know their products and can help demonstrate them. The Sony Tablet was shown being used as a chopping board to cut fruit on, which instilled me with confidence to want to buy one, as I feel it’d be tough /splash proof & reliable. 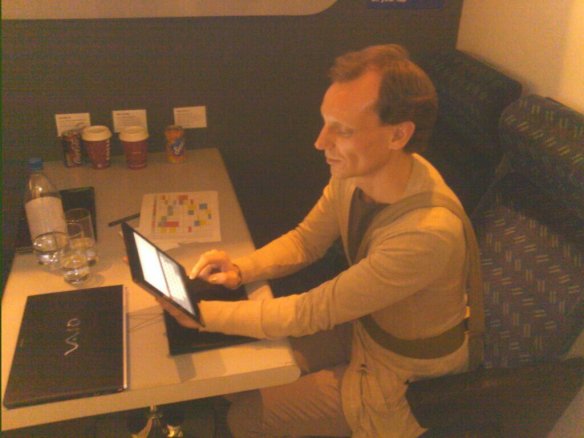 Photo taken using my own phone, not a Sony phone

I would’ve liked to have walked into the laptop/tablet/hybrid room and to have had the computers held by Terminators, who could’ve handed the machines to me & perhaps given some stats.

In the audio room they showed a walkman in a glass of water, demonstrating it as waterproof. That would be a nice thing to have.

In the TV room, they had 4k TV

We got to look really close at the TV’s. I wish the edges were slightly rounded. We were invited to examine pictures on the screens & there was good improvement in clarity from HD to 4K , a good improvement in showing the detail in the pictures. The new 4K TV has great depth in the picture, which brings out detail overlooked by other screens. I focused on a dark grey building. In the HD picture, the building was largely a lump of one shade of grey. In the 4K picture I could see lines defining windows.

SONY WHAT ARE YOU WASTING YOU’RE TIME FOR? With at home consumers.

Sony do astronomers use your technology? Astronomy is coming on in leaps and bounds & the ability to see higher definition is greatly sought after.

But hey, Astronomy TV, watched via a Sony 4K display would be very enriching.

Don’t fret I’m sure plenty of astronomers use Sony, and it is great to have these technologies available to consumers

I’m somewhat old school pixel artist……. I mean it’s a challenge, but let me at it! The ability to manipulate 8 million pixels!!!

Thank you Sony, from the bottom of my heart. I can now again begin to be interested in graphics/imagery, now if you would just make me a great art package (Re-imagine Deluxe Paint please

It was funny, I don’t know if the demonstration was dumbed down, but I didn’t need to be told that graveyards & brickwork are notoriously difficult to get definition on, to pick out detail. Every graphic artist knows that? (Oh yeah, I forget, they just wanted lay people), Grey building, grey windows? If you can pick out detail on that you are doing well, Sony you are doing well. 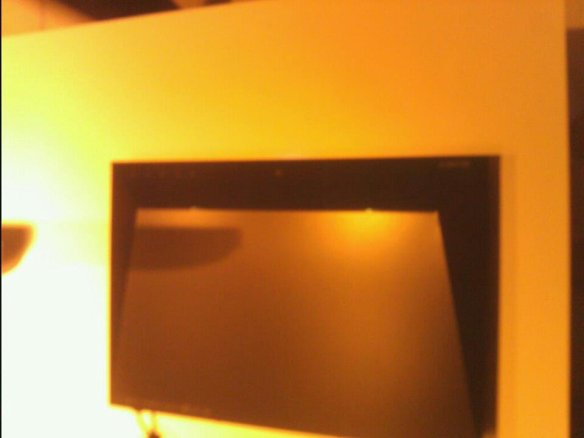 I was pleased to see some different design coming through, namely a blueray player, designed ala flat geometric shapes, reminiscent of Cardassian technology design in the Star Trek off shoot Deep space 9 (DS9), (also in my screenplay “Run for your half life”

Photo above shows, Tri-luminance at work on the left hand screen really helping with colour definition. 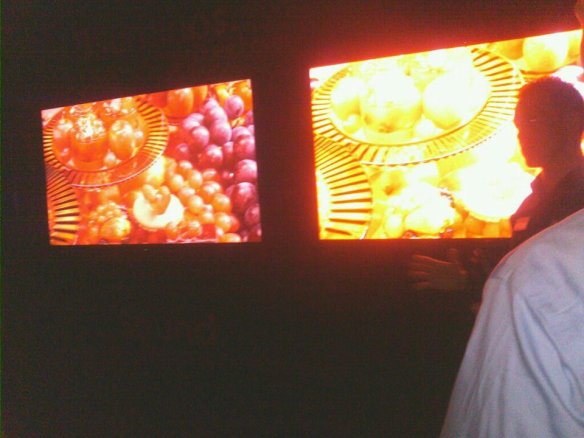 I’d have loved to longingly lingered lackadaisically on Tri-luminance ;D

Tri-luminance is all about defining colours. When we are young we may colour a picture, the sky blue, grass green etc. But in truth the sky may be blue, dark blue in one patch, light blue in another. The sky may be grey, dusky pink, almost always with gradients. Tri-luminance picks out gradients better than other displays. In one example we were shown a bowl of fruit (In a tropical setting IIRC) more than one person suggested picking the fruit out of the screen. When your display makes people want to eat the fruit displayed I think you can give yourself a pat on the back. Thank you Sony, Tri-luminance was the singlemost thing at your demonstration that made me feel passionate about displays/graphics.

Tri-luminance is great, but the great thing is that it really works well with 4k technology, with the special microchip that the Sony TV’s are using which intelligently interprets colour, giving unprecedented detail.

Sony you have done your homework & your products are lovely and appeal to me very muchly ,) I do a half bow/curtsey whilst sweepingly doffing my hat.